Do or Die: Late-Season Elk Adventure

I peered futilely through my binocular. Tears gathered in the corners of my eyes and ran down my cheeks, driven there by frigid mountain gusts barreling over the knob I glassed from. A small lull in the wind, I wiped my eyes and refocused my optic. There! “Jamie, they’re back out on that upper flat!” I whisper-shouted to my wife. A small herd of elk slowly materialized on the feeding bench we’d been watching for hours. “Hon, that herds about a thousand yards out and we’re going to have to get close because of that rise between us. Half an hour of shooting light left, you up for it?”

Shielding her face, Jamie was stuffing outer layers in her pack before my words were lost to the buffeting wind. “That answers that,” I whispered as I took my wife’s lead and slipped out of my heavy layer. “We’re going to need about eight hundred yards and several hundred feet of elevation so bear down, get up that hill and you’re going to get a shot,” I encouraged.

We’d spotted the herd from across a canyon that morning and had used the mid-day lull to get closer to their position. Jamie and I had two free days to hunt while our children were taken care of and the family freezer was in rough shape. Due to my guiding schedule, I’d been building other peoples’ yearly meat stockpiles but not ours. My wife had a permit allowing her to harvest a cow or branch-antlered bull elk in a unit close to our home and with a week left of season, any legal wapiti was fair game.

Halfway up the rise that would reveal the herd, we stopped for a breather. The wind continued to rip across the face we traversed. Jamie tried but failed to conceal her nervousness. The majority of our yearly meat was less than a quarter-mile from us and feeding unawares. I pushed my face next to hers through the wind. “Don’t worry about the result, do what you know how to do and everything will work out. We’re going to work straight downwind of the herd so you won’t have a crosswind to contend with. It should put us right where we need to be.”

Ten minutes later, she laid her .270 over my offered pack. “You’ve got time, make this first one count. Five minutes left,” I coached. A cow worked to the edge of the herd and exposed her tan side. On cue, I heard the rifle bark. The dull thud of a solid hit echoed in our ears as the herd turned back into the security of the timber. A lone cow brought up the rear, close to expiring. “Good shot, Hon! Give her another one to be safe.” The .270 cracked again and the cow lay still. Wrapping my arms around my shaking wife, we shared a moment of quiet as the adrenaline subsided. I glanced at my phone; two minutes of shooting light left. 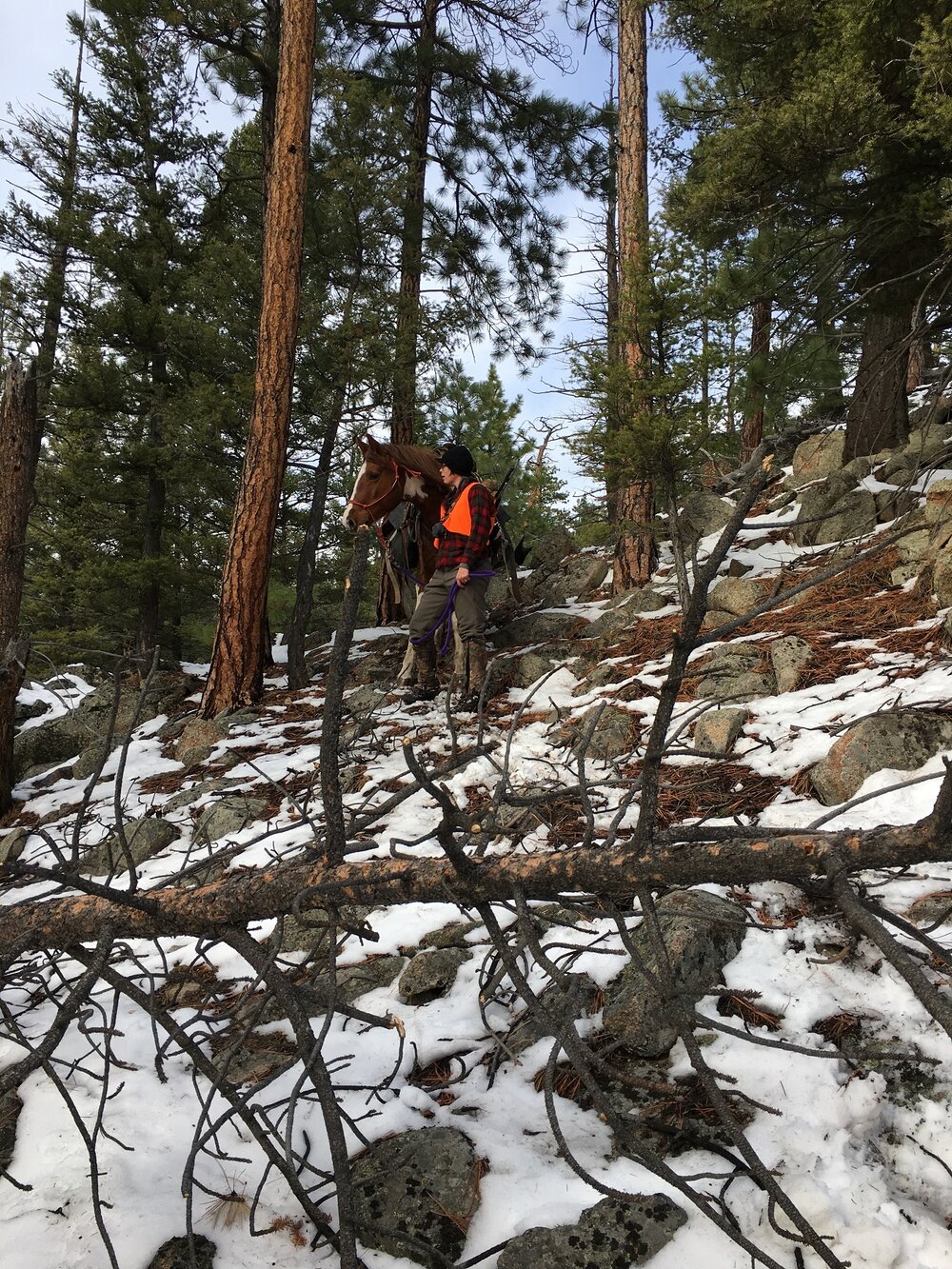 “Congratulations, your fourth elk! And a dry cow to boot, that’ll be some good eating.” Jamie led the way and by the time we arrived at her elk, darkness had overtaken the last remnants of daylight. Rifles and orange vests were replaced with knives and headlamps. “Grab a leg, it’s plenty cold for her to keep overnight. I’ll open her up and we’ll come back with the stock in the morning. If we get some branches under her it’ll get that bottom side cooling better.” We quickly got the elk opened and put several large limbs between the ground, hip and shoulders to aid in air circulation. We’d seen elk left directly on the ground in colder temperatures still be warm to the touch the next day and didn’t want to take any chances. I hung my base layer next to the elk to keep the opportunistic predators at bay and we began the tedious process of picking our way back to the vehicle. “Go slow- snow, rock and deadfall make for a dangerous combination when you’re miles from the rig. Let’s find a route through for the horses if we can on our way down.”

I was up early the next morning, my sons would be home that evening and I was eager to get back to the elk. Would the bears and coyotes have found it? If so, did they leave anything for Jamie’s efforts? Did I leave enough human scent on clothes around the elk to dissuade said predators?

The game clock ran in my head as I had a cup of coffee and caught two horses. One horse, aptly named Sweet, I chose for Jamie. Sweet’s a go-to mountain horse with a good temperament and can be counted on for any chore asked of her. I chose a black paint mare named Socks for myself. Socks was capable in the hills but needed some work to bring her up to Sweet’s level. “Just the day for some miles, Socks,” I murmured to her as I jumped her in the trailer.

Standing at the bottom of the mountain, I searched through rocks and deadfall to find the line from the night before. I had picked a route to get the horses up the first leg of the journey but I second-guessed my optimism now in the light of day. No trails or roads here, just a waypoint on a map and a sharp saw to clear unavoidable timber. “Hon, let’s lead them up this first stretch. I want to save their energy for the pack out. Stay back a bit and pay attention to what’s ahead of you.” The vague landmarks I’d made note of by headlamp the night before began to appear as we meticulously climbed. 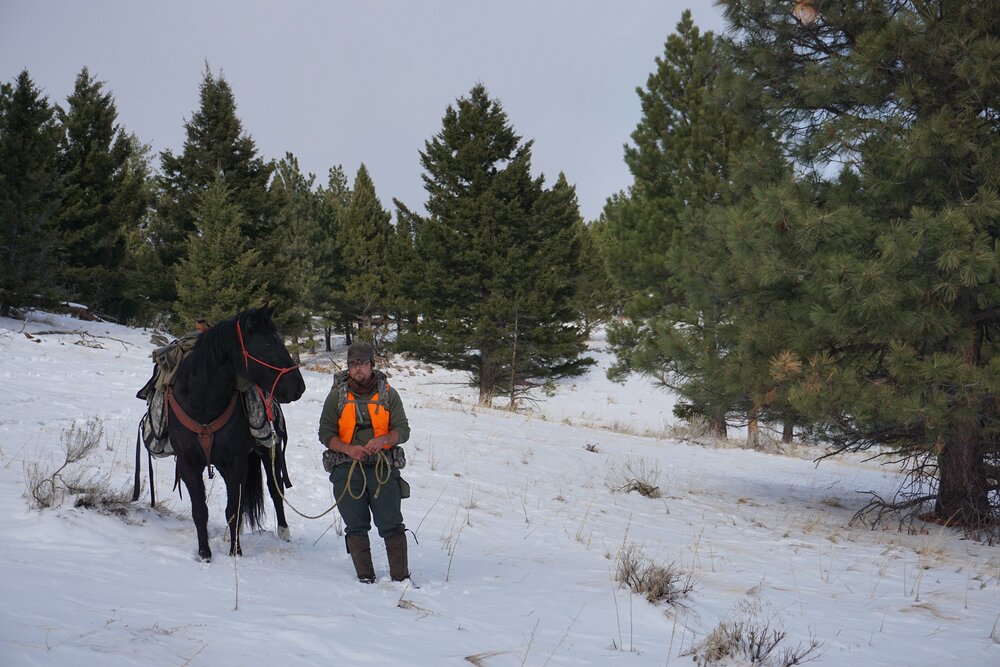 Working my way past a large rock I glanced back to see how my wife was fairing. Movement from the corner of my eye made me turn and flinch reflexively as my four-legged partner, instead of following me around the rock and up, launched herself over the top. Not being an experienced rock-hurdler, she hit the picnic-table sized stone with her belly and rolled off. Wedged upside down between the rock and a downed tree, she flailed for a few seconds before calming down. In my experience, horses can tell when they’re in need of assistance and Socks was no different. “Jamie, tie up Sweet and help me get Socks figured out! She’s not hurt but she can’t roll over and she’s going to break the tree in my saddle.” After taking stock of the situation, Socks calmly laid back and let me loosen the cinch and breast collar. “Let’s give her a hand now that the saddle’s loose, she’s still on it but maybe we can get her up.” 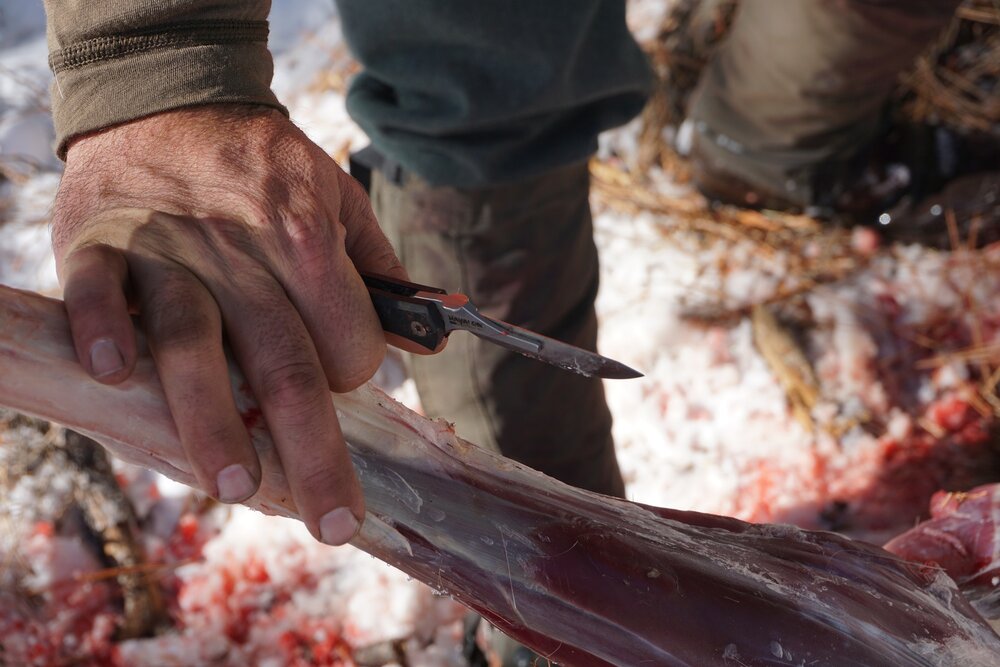 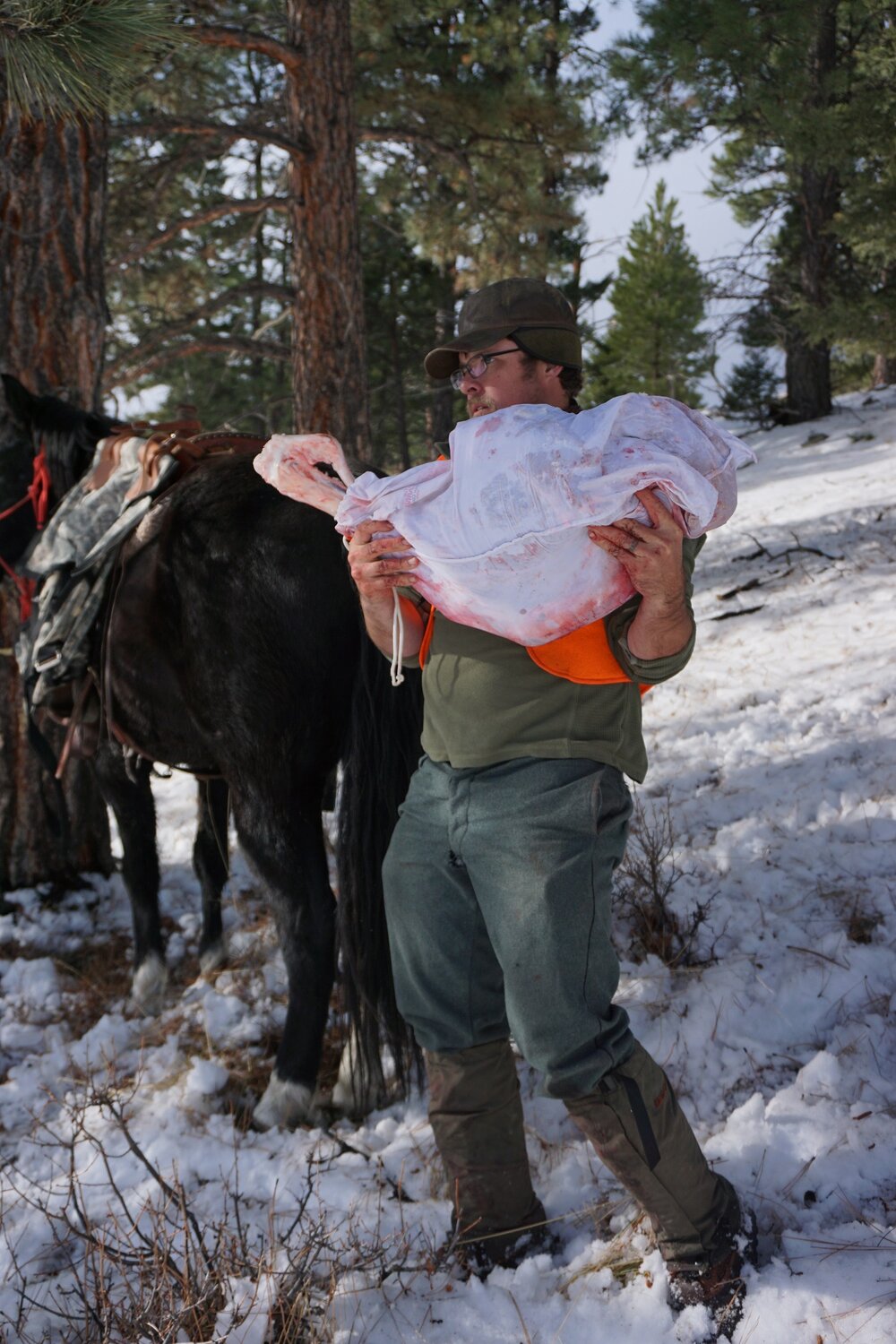 The three of us worked together while Sweet calmly watched on. Socks, extricated from her predicament, happily stood by Sweet while Jamie and I recuperated. Turning nine-hundred pounds of horseflesh upright on a mountainside is not a job for the faint of heart. “I guess she needs some more easy miles before we try this again,” I stated quite obviously to my smirking wife.

Struggling through the last of the tough going, we swung our legs over the horses. Part foxtrotter both of them, we enjoyed the quick-gaited walk they’re known for as the sun broke over the horizon.

“Jordan, there she is!” My head down looking for game sign, the miles of trail burnt off quicker than I’d anticipated. My wife tossed me a rein as she slid off of her horse. I tied Sweet and Socks up as Jamie admired her elk for the first time in full light.

No bears or coyotes had tampered with it. The long brown mane rustled in the breeze and contrasted against the snow while we enjoyed a brief respite. I prepared for the task at hand while quietly watching my wife go through the now-familiar process of justifying her actions. “She’s big, that should be quite a bit of meat. Months and months-worth, you think?” “You bet, Hon. Your shot placement was great and she’s dry. Lots of meat.” The carcass was cool and a veritable mountain of protein began to take shape as we turned the elk into quarters and backstraps. 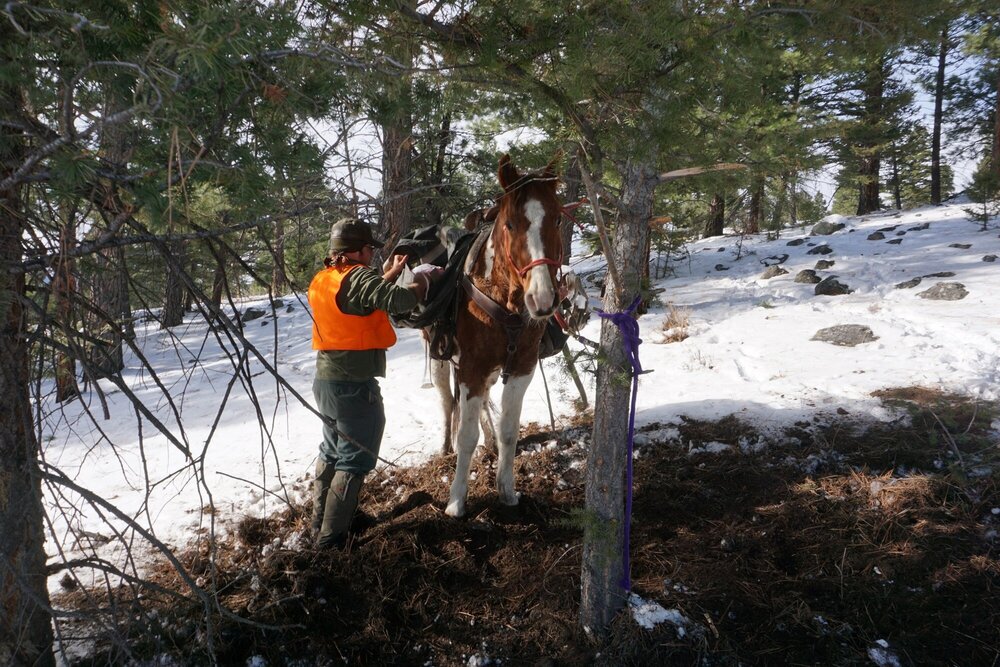 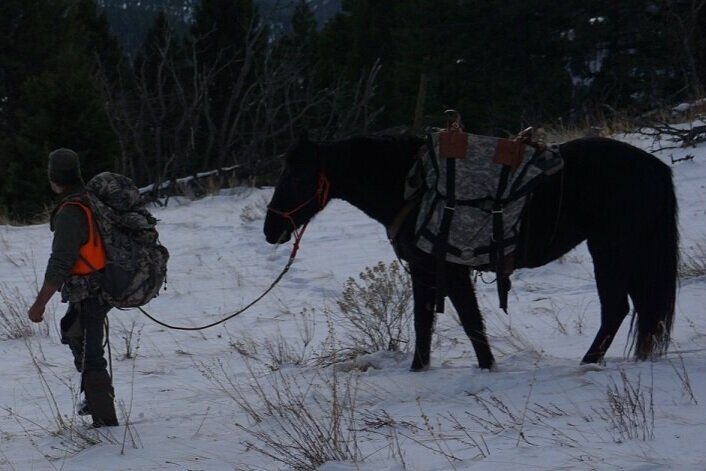 Sliding the last quarter into a pannier I checked the time again. “We should be back before dark if things go well, Jamie.” I took one last look around and grabbed Sock’s lead rope. At home, an empty freezer was about to be filled in the nick of time and two boys would be waiting with anticipation to hear about their mom’s hunt.

Source
Do or Die: Late-Season Elk Adventure is written by Jordan Voigt for www.ronspomeroutdoors.com

BOW PRACTICE LIKE YOU HUNT THIS SUMMER — Ron Spomer Outdoors

BOW PRACTICE LIKE YOU HUNT THIS SUMMER — Ron Spomer Outdoors