The Needle in the Haystack

A story of early season Moose hunting in Northern B.C.

It was a brisk, damp morning in the middle of September when I squeezed into the passenger seat for my first float plane ride. Longtime hunting buddy, Levi Young, and I were headed 250 miles northeast of Smithers, British Columbia, to hunt western Canadian moose.

We flew over a wonderland of mountain peaks, snow fields, mountain lakes, rivers, and vast forests of fall foliage, but as we got closer to our hunting territory, clouds socked.

“We may have to turn back,” our pilot said. “Can’t land if visibility stays like this. Need to have sight of the ground to even consider trying.” He looked toward me for support. Unfortunately, I was on a different page. I was panicking, dreading losing a day of hunting. Knowing we had at least one more bush flight from main camp to reach our hunting area, the uncertainty was agonizing.

“We have to make it,” I said. In that same moment, the pilot dove toward a fading opening in the clouds.

We landed on the river to land in front of main camp. The outfitter was happy to see us because the plane delivered fuel and additional supplies. We all went to work unloading.

“Don’t unpack,” the outfitter advised. “We’re going to try and get you and Levi out tonight.” Pleasantly surprised with this, Levi and I made our way over to the cabin to reorganize our bags with only the essentials we’d need in the bush.

“Let’s go,” yelled the outfitter as he strode towards his small, yellow Cessna. “I’ve been flying non-stop for three weeks, but I think I can stay awake.” We pushed back and I watched him make the sign of the cross as he positioned for takeoff. As we lifted from the river, I waved to Levi who, weather permitting, would fly in on the next round. “We should be to your camp in about 45 minutes,” explained the outfitter.

As we flew up river, the outfitter pointed out landmarks and good valleys and mountains to hunt, noting that at this season bulls could be anywhere. “They aren’t trolling for cows just yet, but close.” All too soon we landed on a large lake and cruised to the far end where an old camp with multiple cabins sat along the beach. 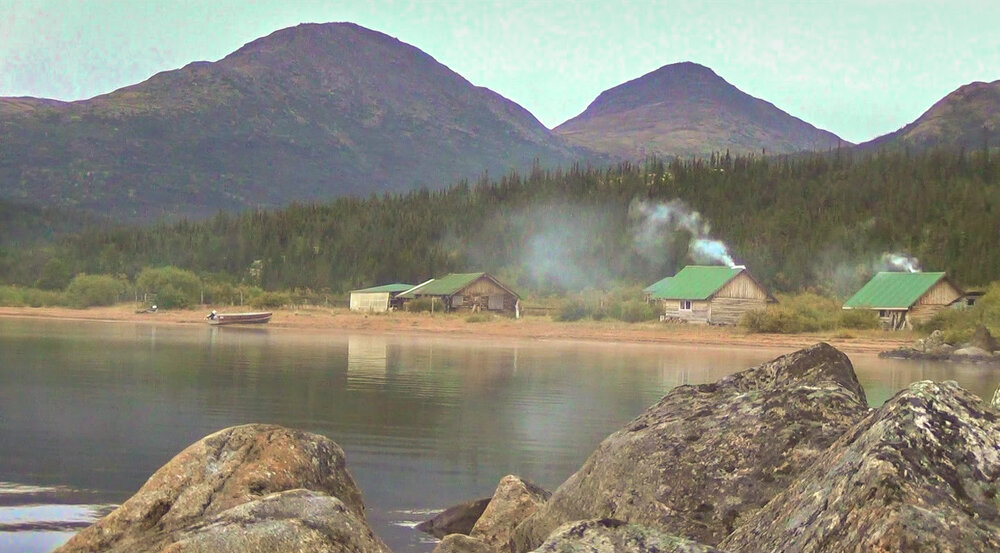 “You guys will stay here tonight and tomorrow morning head up that valley we saw from the air,” the outfitter said. “I’d best get your partner while the weather holds.”

Our first day of hunting was beautiful with blue skies illuminating the glassy mountain lake. A pair of loons floated under a light layer of fog diffusing from the lake’s surface.

When Levi arrived we loaded our gear into a boat and motored to the far end of the lake where we transitioned to yet another transport, an Argo that our guide wrangled toward the side valley we were to hunt. 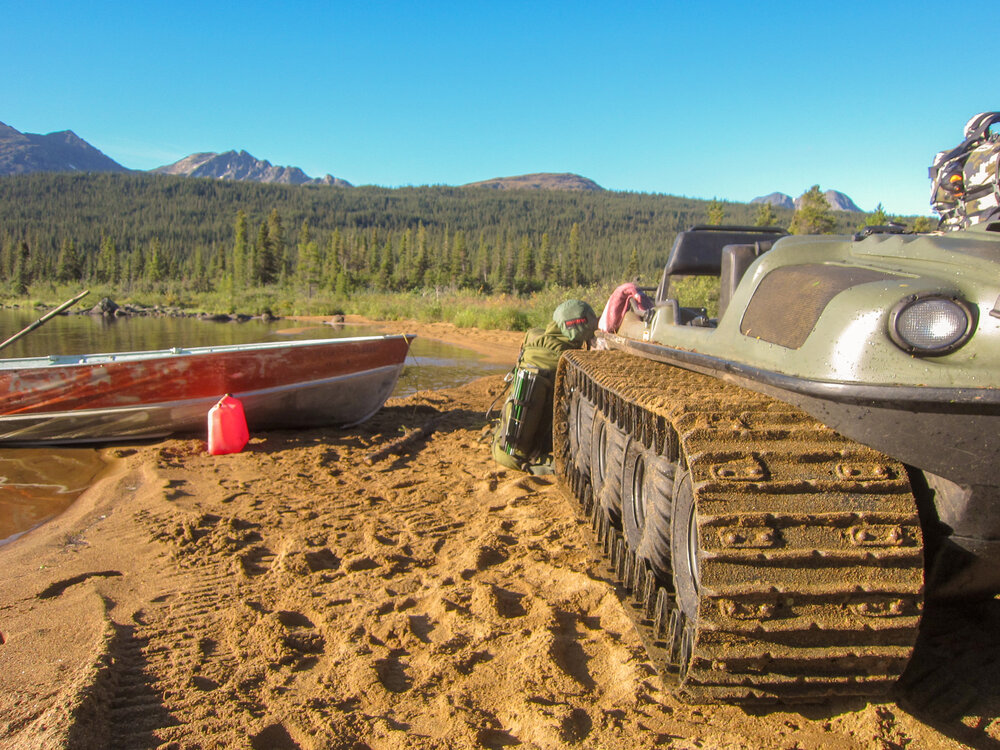 “See that mountain over there, ahead of us?” asked our guide. “That’s where we want to put our drop spike camp. Somewhere at its base.”

It took several more hours to reach it, rumbling and swaying over boulder fields, dense brush, and spongy tundra. “I was in here last week with our head guide and this is where he told me to stay. If we get something, we might be able to go further with the Argo to help us but they didn’t want us driving beyond this bench if we can avoid it. We’ll hunt on foot from here.” This would be the guide’s first time leading a hunt. 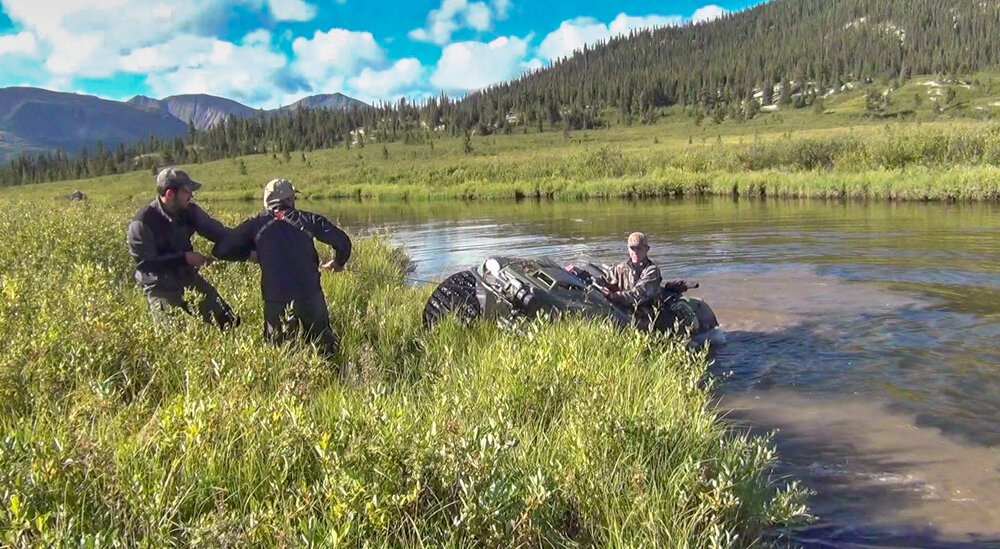 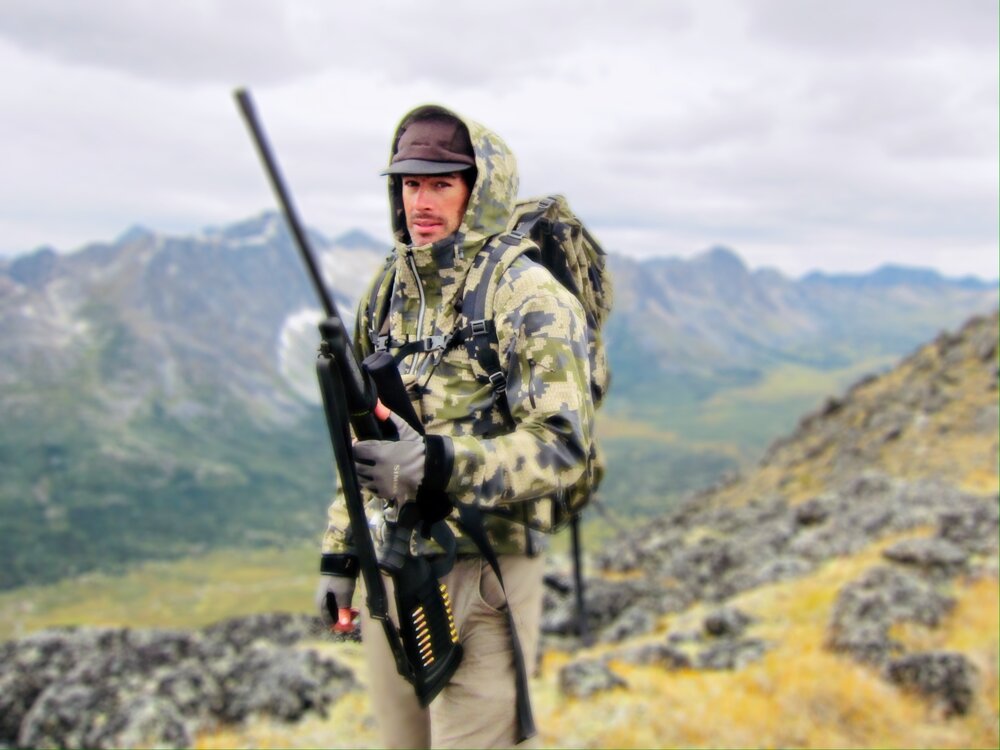 We worked the ridge lines above camp for the next two days. Big climbs covering multiple drainages from above. Stopping and glassing the majority of the time in awe of the incredible BC landscapes. An exotic blend of water, forest, and mountains. Mind blowing scenery. Our weather was good, but we still hadn’t seen a moose. Jet-boil dinner stories led us to a plan for the following day. We decided to head up the valley. We didn’t have much to lose. 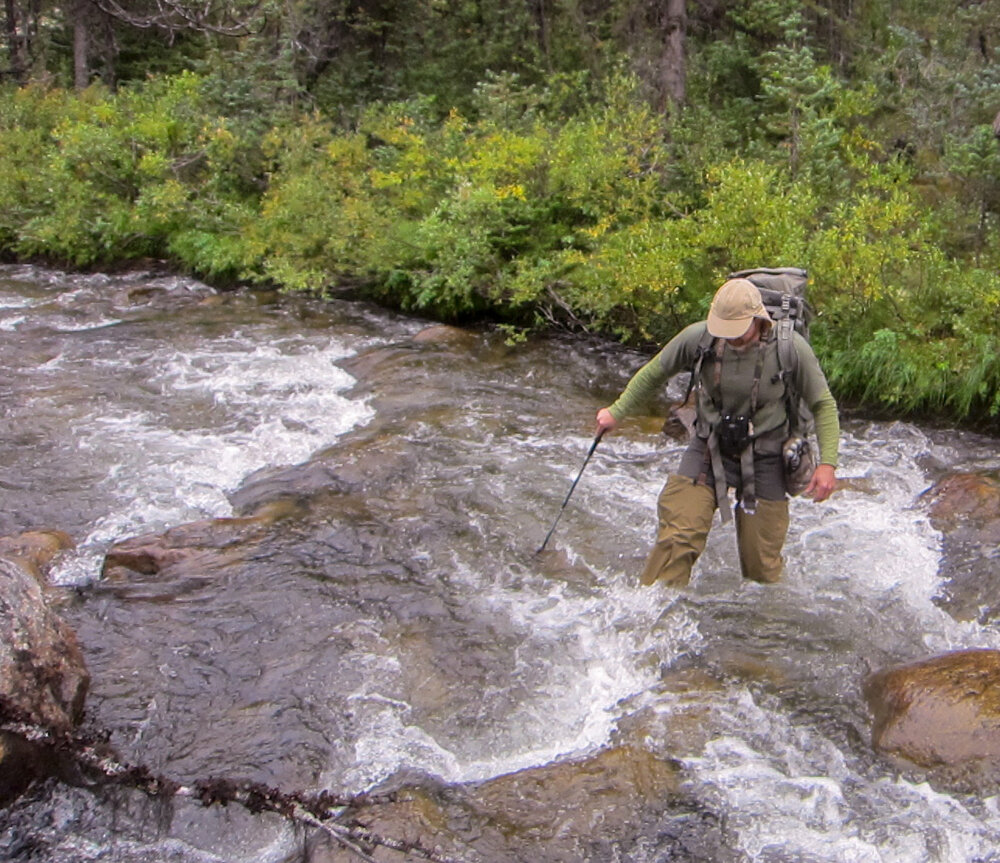 The third morning we left camp at first light. We had gone probably four miles when Levi spotted a moose in the 8-foot-brush. “There he goes!” Levi gasped, grabbing me to pull me along. We ran up an ankle-deep bog, scrambling to higher ground. We came to a rise and I steadied my rifle against a lone pine tree. We spotted the bull just as he stepped into the pines. We didn’t even have time to determine whether it was a legal bull or not.

“Holy shit that was exciting!” I said. “Good spotting buddy!” It was going to be a challenge to get a shot off in this terrain, I thought. We were rejuvenated from the encounter and back on point, hiking another two miles while watching for the bull until reaching a lone peak in the center of the valley. We climbed on top of a huge boulder and spent most of the afternoon glassing miles of country. We estimated we were 6 miles from spike camp. It was a slog back. We ate and fell into bed.

The next morning we packed our camp back up this valley, setting up near that lone peak, seeing several caribou on the move, but no moose. It seemed like a great pinch point for animals and a great place to start the following morning.

Clear skies made way to a miracle of stars in the night’s dark sky. Such splendor is sure to inspire gratitude, proof we live in a world full of hope and forgiveness. It had been years since I had seen such a brilliant night sky. We may have been struggling physically but our hearts were full reflecting on family in a place so close to God. Moments like this are the true reward of adventures. Something natural, unexpectedly offering a feeling of gratitude, reflection and the strength to do more in our daily lives. Hunting in a place like this will either break you, or reward you.

Our fifth morning was filled with hiking into an unforgiving hole with no visibility. “We need to get out of this creek bottom,” I told Levi. Our guide headed back to the lone peak, bumping a young caribou near the top. The animal sprang across that broken, tangled terrain almost as if flying. We also found grouse and a great vantage for glassing, so we sat for an afternoon snack.

At this time the guide decided to use the elevation to improve his satellite phone’s connection and check in with his boss. “Where are you?” the outfitter asked. “You guys need to get away from that mountain because it is a stone sheep mountain.” This put the fear of death into our young guide. He literally ran down the mountain and began packing his gear. We caught up, went to work on our own tents and were headed back down the valley just after eating dinner. I was confused but not upset, mainly because we had hunted the back end of this valley hard. I was ready for new country. As we walked down the long valley, Levi spotted a dark object nearly a mile ahead.

“Let’s leave our packs here and see if we can get across the creek to get a closer look,” the guide said. Normally, we wouldn’t leave our packs behind because back-tracking for gear is inefficient and there is a risk of losing it. Shedding the weight, however, allowed us to move quickly.

We raced to reach that moose, hopping boulder to boulder across the creek, climbing small ridges and humps to see into the cover. The bull could have bedded. Even if walking, it could have been obscured in a number of draws. “Could take a long time to find him.” I’d no more than said this when the guide muttered “I just saw his horn move.” The bull was lying where Levi had first seen it, now just 200 yards away. Depending on his next move, we might get a shot from where we sat.

“Yes, legal bull. Wait ‘till he turns broadside.” Seconds felt like minutes. My heart was jumping from my chest. The bull began to move. “Here we go. Are you ready, Levi?” I asked.

Boom… My Thompson Center 300 Win. Mag. cracked the silence. The moose crumpled out of sight.

“Stay on him,” the guide exclaimed. “You might have just stunned him.”

I was jumping out of my skin with excitement. A childhood fantasy was playing out spectacularly. “You sweet son-of-a-bitch,” I said, slapping our guide on the back. This comment was intended to be an endearing statement highlighting my sheer exhilaration and gratitude. I hope the guide took it that way! We waited for several minutes to ensure there was no unexpected movement from the bull before picking our way to it.

The bull, you can imagine, was massive. As we worked removing the meat from the bone, I reflected on my good fortune. Bull moose hole up in high mountain valleys and dark timber to escape bugs, wolves, and summer heat. Having the good fortune to take a moose in such an expansive territory prior to the rut was special. I was grateful for Levi, for our guide and outfitter, for my family, this land and this adventure. Eventually, the guide went back to retrieve the Argo as Levi and I worked to finish preparing the moose for transport. The Argo was a sight for sore eyes. We faced an 11-mile trek back to the lake where the outfitter’s plane would pick up the meat. 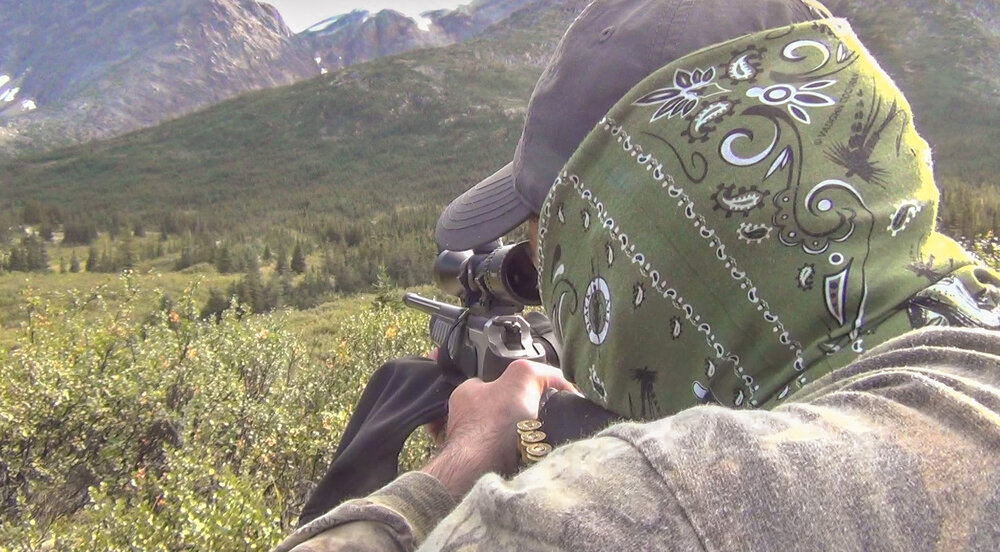 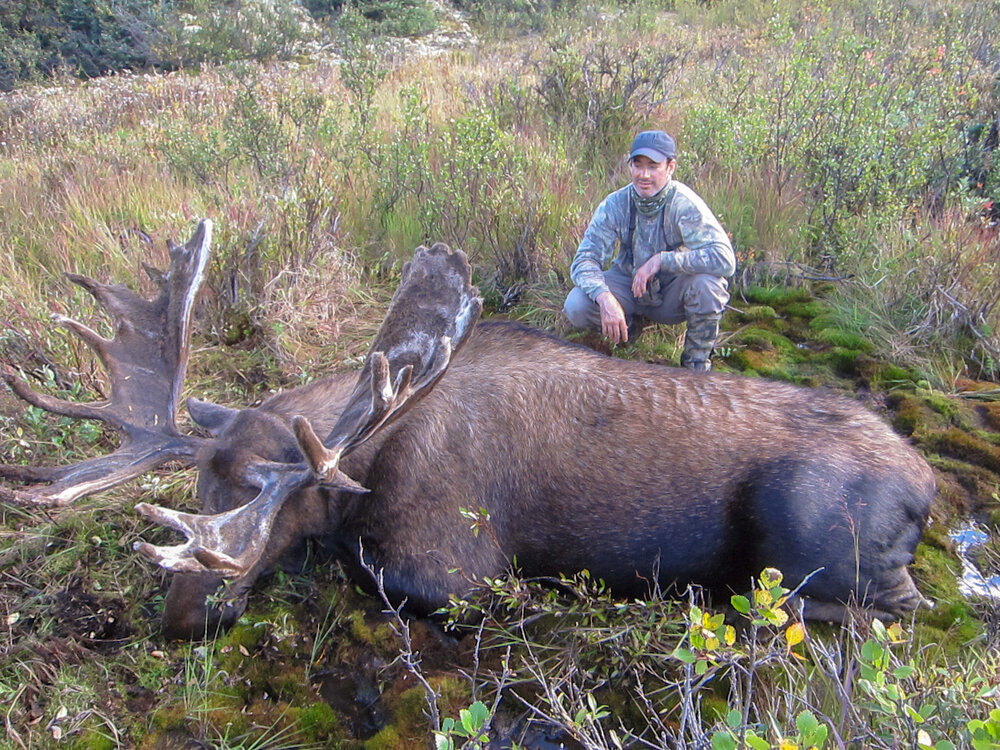 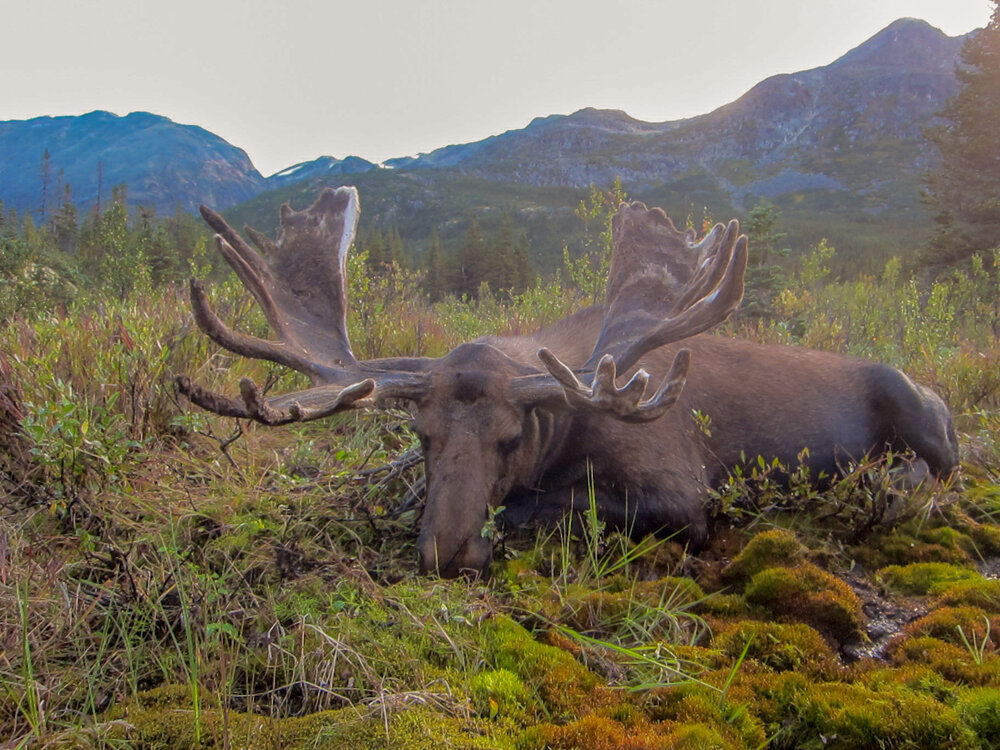 While savoring fresh moose meat with every meal, we spent the remaining 8 days of our hunt pursuing mountain goat and caribou, but those are other tales from the incredible wilds of British Columbia, a special place.

Transitioning from one great adventure to the next. Photo by Levi Young

Start planning your next adventure.

We want to give back and our advice is free, so don’t be afraid to ask for help.

Source
The Needle in the Haystack is written by Travis Volk for www.ronspomeroutdoors.com